Dead stars 'can re-ignite' and explode

Astronomers have shown that dead stars known as white dwarfs can re-ignite and explode as supernovas.

The discovery appears to solve a mystery surrounding the nature of a particular category of stellar explosions known as Type Ia supernovas.

Theorists suspected that white dwarfs could explode due to a disruptive interaction with a companion star, but lacked definitive evidence until now.

Details of the research appear in the journal Nature.

The "smoking gun" in this case was the detection of radioactive nuclei being generated by nuclear fusion in the cosmic blast.

Astronomers have long had the tools to detect the signature of this fusion, but had to wait for a supernova to explode nearby in order to begin their observations.

Towards the end of its life, a star with the mass of the Sun will shed its outer layers as its core shrinks down to become a white dwarf. Left to their own devices, single white dwarfs will just cool off slowly over time.

But there is a maximum mass at which a white dwarf can remain stable - a property known as the Chandrasekhar limit, after the Indian-American astrophysicist Subrahmanyan Chandrasekhar.

If a white dwarf steals matter from a stellar companion, or collides with another white dwarf, the extra weight can compress the carbon in the star's core until this element undergoes nuclear fusion.

Although Type Ia supernovas are expected to occur frequently across the Universe, they are rare occurrences in any one galaxy, with typical rates of one every few hundred years. But an opportunity to 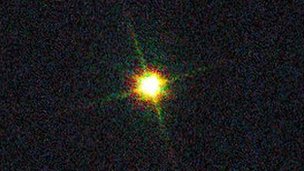 observe one of these events came on 21 January 2014, when students at the University College London's teaching observatory at Mill Hill in the UK detected a type Ia supernova, later named SN2014J, in the nearby galaxy M82. Theorists propose that the carbon and oxygen found in a white dwarf should be fused into radioactive nickel during a supernova. This nickel should then quickly decay into radioactive cobalt, which would itself subsequently decay, on a somewhat longer timescale, into stable iron. Type Ia supernovas that exploded long ago are the cosmic sources of the iron in the Sun, the Earth and in our blood.

Type Ia supernovas are relatively rare occurrences in any one galaxy

This decay chain generates gamma-rays that give rise to bright emission from the location of the supernova.

Eugene Churazov and colleagues studied gamma-ray data gathered by the European Space Agency's Integral spacecraft between 50 and 100 days after the explosion.

By this time, Dr Churazov explained, "the white dwarf has already expanded to a size larger than our solar system".

He told BBC News: "The envelope of ejecta (debris) is semi-transparent, so no matter where the gamma-rays are produced, they are able to escape through the ejecta with a probability on the order of 60-70%."

They looked for - and found - the signature of cobalt decay in the profile of gamma-ray emission from the supernova.

Moreover, the observed amount of gamma-ray emission was also an excellent match for theoretical models of a white dwarf explosion. However, the researchers were not able to distinguish between the two theoretical scenarios for the initiation of a white dwarf supernova.

Dr Churazov explained: "It is perfectly consistent with the simplest scenario, of a single white dwarf with a mass close to the Chandrasekhar limit. But we cannot exclude with this data that this event was caused by a merger [of two white dwarfs]."

In a viewpoint piece in the same edition of Nature, Robert P Kirshner, from the Harvard-Smithsonian Center for Astrophysics in Massachusetts, wrote: "Upsetting the conventional wisdom is always a joy in science. You can get prizes for that."

But, he explained, "there is also a deep pleasure in showing decisive evidence on an important physical idea that has been used without proof for decades," adding: "It is a wonderful result."